The weather smiled on our inaugural SPARKLEFEST event held in Wellingborough in July.

The main objective was just to have a bit of summer fun, so the sunshine and heat on the day was hugely welcome.

The show involved the appearance of many and various types of transport presenting themselves to an admiring audience of like-minded individuals.

Most of the vehicles attending were owned by local people who do know Arkle, but one elderly MG trundled all the way in from Surrey, just because it could.

Sara Spade and The Noisy Boys (as featured in the video) provided a beautiful musical backdrop and the Weatherbys Staff Restaurant laid on a sumptuous brunch, which was free for all drivers/riders presenting show vehicles.

Everything from pushbikes to hot-rods were on display, creating a real treat for the eyes and at Midday there was a thundering ‘three minutes of noise’ when all engines were fired up and revved, horns allowed too.

With more than sixty fruity cars involved, it was absolutely deafening!

The Lotus racing car (also featured in the video) was brought along by Mike Bainbridge, one of AFL’s introducers, who then won the prize for the ‘Most-Liked’ vehicle, as voted for by the other attendees.  This was closely followed by the Routemaster bus, brought along by Mark Allin and Doug Chapman’s drop dead gorgeous Aston Martin DB5.

Mike’s Prize will be presented to him later this month and it was such good fun that the Arkle team are now starting to think about a possible repeat performance in 2016.

You can view a video showing the highlights from the event here. 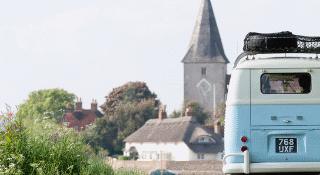